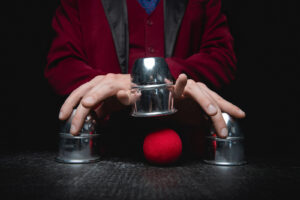 I have been gripped by the stories of Anna Delvey (Sorokin) and Elizabeth Holmes, bingeing the recent dramatizations: Inventing Anna and Dropout. I keep wondering how all these people were bamboozled, overlooked the signs, and simply refused to ask for evidence.

And while there’s something to be said for the sheer moxie involved in pursuing a singular vision unwaveringly, there’s a line between commitment and confidence versus grift and fraud. Clearly, the people around Anna and Elizabeth didn’t think they were on the other end of a con, so how do you spot one in your consultant?

Neither Anna nor Elizabeth ever doubted themselves. When challenged, they doubled down. They approached the world as though there was nothing else to learn. This leads to an over-estimation of abilities. Acknowledging limitations means someone is self-aware, knows their opportunities for growth and development, and recognizes when to ask for guidance. A good consultant will tell you where they have the expertise and where they do not.

In Texas, we would say all hat and no cowboy. If you are dealing with someone who has an answer for everything but isn’t asking questions, then you know you have someone with an outsized attachment to their vision. Both Anna and Elizabeth exhibited behaviors that allowed no departure from their way of doing things. Even the best vision requires the ability to pivot and refine. Consultants should not be in the business of pushing their agenda; they should be partnering with you to push yours.

Each time Anna or Elizabeth was asked for proof/results/evidence, they deflected and challenged the requestor. They didn’t spend a lot of time getting defensive. They went on the offensive. They cast the requestor as above the need for details and intimated such a petty need would conflict with the requestor’s importance or at least what they wanted to believe themselves to be. A good consultant will give you examples of results at similar projects, innovative solutions, and industry/discipline expertise readily.

Both Anna and Elizabeth were masters of the endorsement shell game. They leveraged important people to attract other important people, and no one ever questioned the basis of the recommendation. No one ever checked references for fear of offending those people. Get references from your consultants and follow up on them.

Fear of Missing Out. Elizabeth and Anna exploited people’s desire to be part of making a grand vision happen, something that would change healthcare for the better in Elizabeth’s case, or the chance of being in the ultra-exclusive club of who’s who in Anna’s case. Again, consultants shouldn’t be in the business of pushing you into something you’re not. Good consultants will help you get where you want to go; excellent consultants will challenge you to see the possibilities beyond that, as well.

In both cases, Elizabeth and Anna had extraordinary visions, the charisma to get people on board with their visions, and the fortitude to pursue them relentlessly. What they lacked was the willingness to put in the hard work of acknowledging the holes, asking for help, flexing on the path, learning, refining, failing, and retrenching. It’s the refusal to do these things—and by doing so gain the necessary experience—that ironically doomed them both.