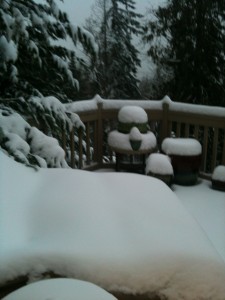 Oh my! This past week in the Seattle area, winter came with a blast of snow. While snow levels varied across the area, I live in a neighborhood in the mountains and we got a good 8-10 inches. Knowing the storm was coming – which was hard to miss, (before we lost power), because TV coverage was aired every 30 minutes! – I went to the store to pick up some staples like milk, bread, fruit, chili fixin’s and WINE. What I saw was the same scene I’ve observed before, but shocking none-the-less. The shelves were close to bare. 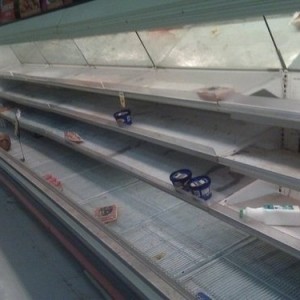 What is up with this?  Why do we so easily shift to this hoarder mentality when we anticipate that we can’t get to a store for a couple of days?  People tend to go into this self-preservation mode and oftentimes it can get ugly. Obviously, fear of going hungry strikes some animalistic instinct in us.

I think some leaders have this same animalistic instinct when it comes to looking after their own careers. It reminded me of leaders with whom I’ve worked that are much more focused on themselves (self-preservation) vs. their team or the organization. They have this same hoarder mentality, rather than an abundance mentality.

The abundance mentality is about thinking that there is enough to go around so everyone can have a part in the success. It shows up in leaders who freely give people autonomy to take on a new challenge without having to be in the middle of it all, looks for ways to give their folks exposure to initiatives that are highly visible in the organization and shares the credit for a job well done.

What’s interesting to me is that when leaders demonstrate that abundance mentality, more opportunities seem to present themselves. It’s like a self-fulfilling prophecy. I think that the people who work for someone with that abundance mentality become very loyal to that leader and look out for the leader’s best interest. Those people WANT to do good work, not only for themselves, but for their leader and team. When the team is successful, the leader is viewed as successful and the “winning” cycle just keeps on cycling!

On the other hand, the hoarder mentality drives a different set of behaviors. That type of leader will want to lead or stay very closely involved in those highly visible projects, often micromanage and “own” all the decisions and strip away ownership and credit from others. They hold on to the notion that “this could not be successful without me!” Believe me, no one on the team will foster any loyalty to that leader and guess what? That leader’s ambition will be realized – it will be all about them because they’ll be the only left on the team!

My tips for leading with an abundance mentality and creating loyalty. Share:

Leave the hoarding behaviors for the grocery store before the next big storm!